In 2019, FELASA recognized Dr. Werner Nicklas of the German Society of Laboratory Animal Science (GV-SOLAS) for his lifelong work on guidelines to standardize and harmonize animal health monitoring programs. 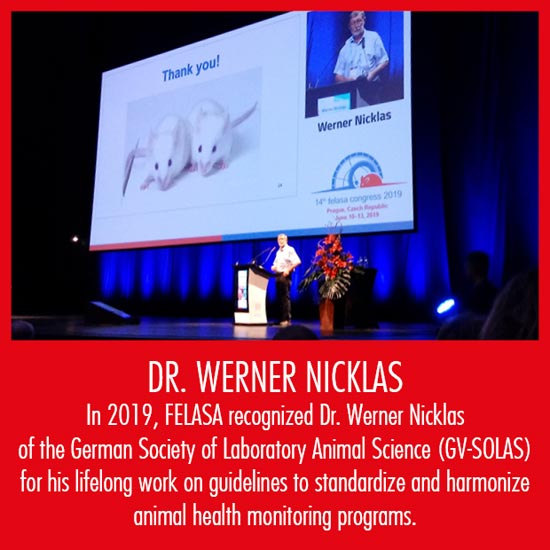 His efforts became important to the transportation and importation of laboratory animals, particularly genetically-engineered models and especially between Europe and America. A result was his appointment to several working groups, including between FELASA and AALAS to address such issues.

GV-SOLAS wrote this about Dr. Nicklas: “His main goal has always been the harmonization and standardization of the health surveillance of laboratory animals in Germany, Europe and beyond. This was largely due to the publication of the "FELASA guidelines for the accreditation of health monitoring programs and testing laboratories involved in health monitoring" (Lab Anim, Feb. 2010), which [he] also developed as the head of a FELASA working group. These two guidelines are today the foundations and standards for the hygienic monitoring of laboratory animals throughout Europe.”

Tecniplast also wishes to recognize and congratulate Dr. Nicklas on his contributions to laboratory animal science. With that in mind, Panorama invited Dr. Bruce W. Kennedy, his colleague and past president of AALAS and LAWTE, to be our guest writer and share with readers their interview of the journey in lab animal with Herr Dr. Werner Nicklas.

Herzlichen Glückwunsch (hearty congratulations) on receiving FELASA’s 40th Anniversary Award in the scientific category. That is a wonderful achievement. Please tell me more about this prestigious award, which recognizes all of your contributions to animal health. How does it feel? What does it mean to you?

This award was a big surprise for me, and I never expected or hoped to receive a recognition like this for my work. First of all, I had service functions in the diagnostic laboratory and many other routine tasks like all of us who are working in the animal facility of research institutions. I was proud when I got the opportunity to work together with colleagues in the hygiene committee of GV-SOLAS and also in various working groups of FELASA. These working groups were important for me personally, as they offered the chance to discuss issues of laboratory animal health with colleagues, and it was nice to see that, after many years, our work had impact on health monitoring and reporting within FELASA countries, but also in other parts of the world. 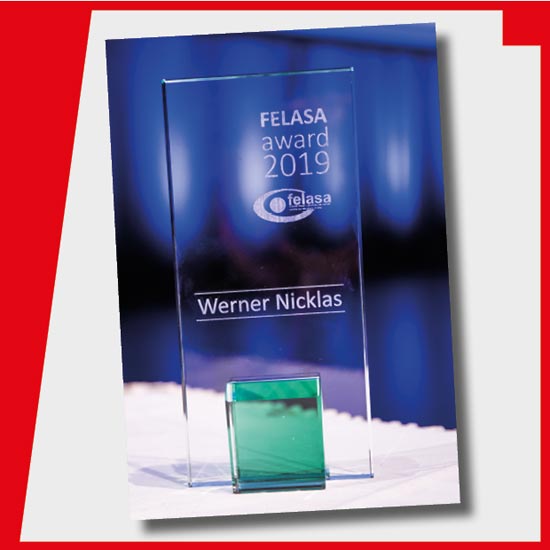 Your work began in the 1980s, correct? What was it like in those years in terms of animal health monitoring and caging? I mean, how were things different compared to today?

I started in laboratory animal medicine in Heidelberg in 1979 with the establishment of the diagnostic laboratory. The situation was totally different compared to today. Just a few years earlier, the animal facility had been centralized, but many researchers still bred their animals for research by themselves and ordered animals from far more than 10 different breeders. We did not have many options for housing, as filter-top cages or even individually ventilated caging systems (IVCs) were not available. We housed rodents in Makrolon® polycarbonate cages and we had isolators. Infectious agents could spread easily between cages, and we, like all other rodent facilities, had serious clinical problems caused by Mycoplasma infections, Sendai virus, mouse hepatitis virus, and even mouse pox, among many other viral and bacterial agents. Ecto- and endoparasites were found regularly. Viral infections, unwanted bacteria and parasites were also not uncommon in animals from commercial breeders. Already in the early 1980s, I began to ask commercial breeders to provide information about the absence or presence of defined agents, but they stated that diagnostic laboratories testing for the whole panel were difficult to find in Germany and also in other parts of Europe.

In 2002, you published the “FELASA recommendations for the health monitoring of rodents and rabbits” in Laboratory Animals. Explain to us the significance and impact of that paper.

Subsequently, this recommendation became during the years much more recognized and followed.

Several years later, in 2014, you were part of the joint AALAS and FELASA effort to make recommendations about health monitoring of animals transferred between facilities. Your contributions were recognized there as well. Why was that so meaningful?

There have been many attempts to harmonize health monitoring internationally, for example between the USA and Japan. However, these were usually not published in journals and were not easily accessible. I think that it was a good decision that this initiative (and others) was started to establish recommendations between the USA and Europe. Shipments of animals are crossing the Atlantic Ocean every day, and it is important that recipients of animals get information on the health status of the animals which is easy to read and to understand. However, it is my impression that this AALAS-FELASA recommendation on health monitoring does not yet get the recognition it deserves. It could be even more helpful to promote improvements in health reporting and to make such information on the microbiological “quality” of animals exchanged internationally accessible and easier to understand. 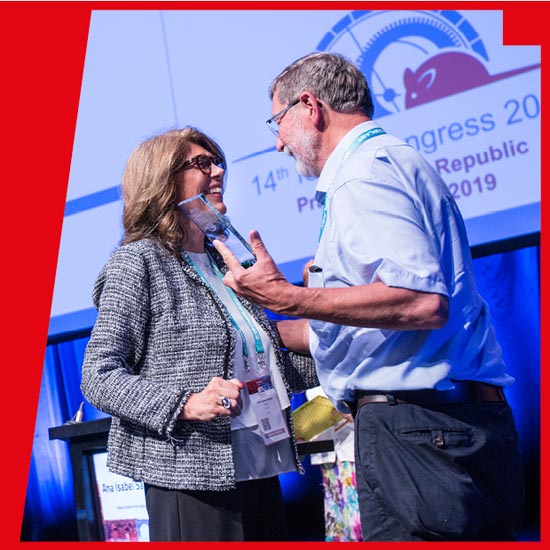 I know that you retired a few years ago from the German Cancer Research Center (Deutsches Krebsforschungszentrum, DKFZ) in Heidelberg. What brought you there to begin your distinguished career? What kept it fun and interesting in the lab? And what are you doing now to stay busy?

As already mentioned, we had serious clinical problems in the animal facility, and the head of the animal facility looked for a second veterinarian who might establish diagnostic procedures in order to find the causes for diseases and death. I had some years of experience in veterinary microbiological diagnostics and obviously fulfilled his demands best. Naturally, I had many additional tasks, but I always got the opportunity to further develop the diagnostic laboratory and to expand the panel of tests and agents, adapting them to the needs of the facility. Although it may seem to be “only” routine work, it has been interesting and challenging all the time. For example, whenever a test had been developed, new methods became available, or new agents were detected, I could be involved. I started with diagnosing Mycoplasma and other bacterial infections and ended with multiplex serology and multiplex PCR for a broad panel of agents including murine astrovirus.

After retirement, I am naturally sometimes missing the opportunity to perform testing in the laboratory. But I still get invitations to seminars or courses where I meet colleagues, many of whom I have known for a long time. Instead of working in the diagnostic laboratory, I now enjoy having much more time than previously to care for my family, the garden, our dog, and hunting.

I am trying to recall when we met, during which AALAS meeting. When did you become involved with GVSOLAS, FELASA, and AALAS? In your opinion, how does such networking contribute to scientific progress?

acquainted with new colleagues. I became active in FELASA in 1989 when I was asked to become a member of the first FELASA Working Group on Animal Health. In 1994 I received a travel grant to attend the AALAS Annual Meeting. This was an exciting time as Helicobacter and new parvoviruses had been detected previously, so I then tried to attend AALAS meetings whenever possible. This was the best opportunity to get access to actual information about new agents and to meet those

people who did basic research on rodent microorganisms. I think that networking on a broad and international basis is an important requirement to get access to actual information and to do your job as good as possible. 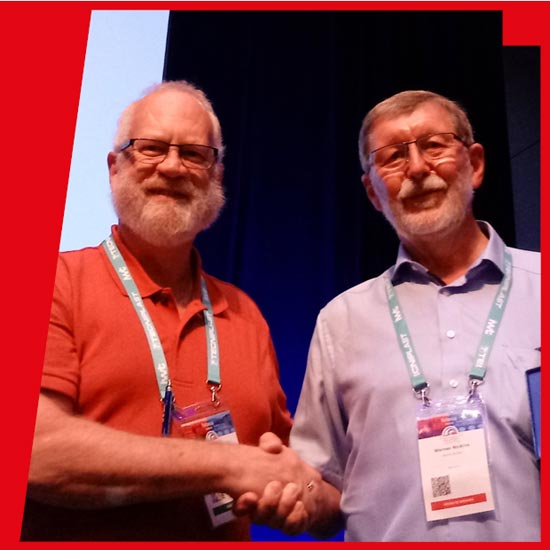 Both you and your research are now recognized as significant contributing parts of the history of animal health, technological innovations, and caging types developed to protect animal models. Today animal science benefits, as you mentioned, from innovative products such as the IVCs. Without biosecurity for cages, the animal is undefended, right? Can you comment and elaborate on that?

In fact, I do not really have much experience with different types of rodent caging. Especially during my last 10 years I mostly focused on my diagnostic work and was not much involved in the management of the animal facility. However, it is true that animals were undefended when modern housing systems did not exist. Agents could spread easily within a population but this also means that detection of infections was easier than, for example, in individually ventilated cage systems. New caging types made work in the animal house easier and more efficient but, at the same, the extreme compartmentation in IVCs created new problems as infections became much more difficult to detect or exclude. On the other hand, gnotobiology developed long before these different caging types were developed. Infectious agent experiments were also possible and were successfully performed without compromising other animals. But I must admit that work was much more complicated and required a much higher degree of discipline.

I know that you’ve had a distinguished career in laboratory animal science. Yet you tell me that you simply wanted to do your job each day. What is your message for the next generation of lab animal workers?

I was in the lucky situation that I always had an exciting job. Especially during the first 20 years I could bring practical experience from the animal facility together with findings from my diagnostic work. We were a good team with experienced and motivated lab technicians. I also had the support from our institution to further develop the laboratory and adapt our work to the various needs. Many developments were only possible because there has been a fruitful cooperation with researchers from our institution and with external specialists. This permanent stimulation in a good atmosphere keeps work exciting, and very often I could not wait to go to the lab and see results. It happened many times that I was afraid I would miss something if I did not go into the lab. This combination of a knowledgeable team and cooperation with colleagues is in my eyes an important prerequisite to sustain motivation and enthusiasm for the work. Both are necessary to forget (or put aside) that you spend much more time at work than you are paid for.

Danke schön, Herr Dr. Nicklas. I’ve enjoyed getting to know you and your lifelong work better through our conversation. It’s quite evident that the discipline of laboratory animal science has benefited from your time in the diagnostic laboratory. The international community is grateful and the presentation in your honor at the 14th FELASA Congress in Prague echoes these statements.