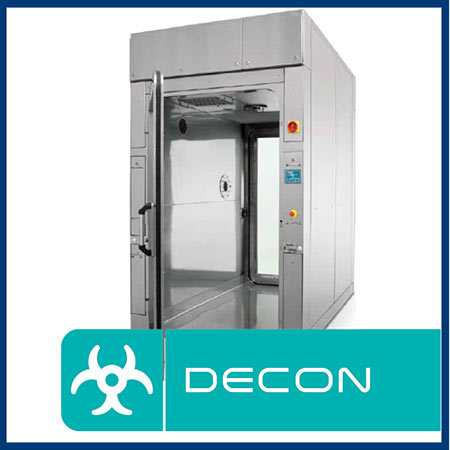 The journey through the low-temperature decontamination with hydrogen peroxide continues with a deeper look inside the technologies currently in use to perform an automatic environment disinfection.

In this second episode we will explore the functional principles of the automatic airborne disinfection systems (AADSs) that use H2O2 vaporized or aerosolized as decontaminant.

Bio-decontamination with Vapour Phase Hydrogen Peroxide (VPHP) is historically the first method discovered to be rapidly effective against spores. When hydrogen peroxide in vapour phase is injected into an environment, the gaseous concentration of H2O2 grows up. The concentration is normally expressed in volumetric part per million (ppmv or ppm), which is a unitless parameter.

There are many suppliers of VPHP generators in the market with different features and options. Despite these differences, the functional principle of all VPHP generators is always the same.

In contrast, aHP systems produce an aerosol through a mechanical action (e.g. pressurizing the solution upstream via a calibrated nozzle).

A first comparison between VPHP and aHP

Despite both mechanisms (Vapour and Aerosol) rapidly achieve the bio-decontamination goal (usually 6-log reduction), the two technologies have differences due mainly to the physical state of the decontaminant generated. Even if a vapour is different from a natural gas, its behaviour is more like a gaseous substance than aerosol, and for this reason VPHP has a better homogeneous “three-dimensional” distribution into the environment than aHP. Micro-nebulization is visible at naked eye, the fine mist represents a frank wetting process. On the other hand, aHP represents an efficient and cost-effective solution.