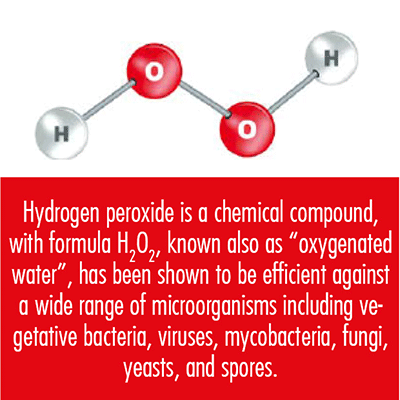 The simplest compound for a reliable and effective low-temperature bio-decontamination methods.

Bio-decontamination is a fundamental process for many branches of manufacture and research, such as pharmaceutical industries and animal trial facilities. Moreover, the current COVID-19 outbreak is generating higher awareness, about biocontainment and bio-decontamination, even in public environments, such as schools, swimming pools and gyms.

In this first episode we will describe some base concepts about bio-decontamination with hydrogen peroxide, the efficacy of this chemical compound and how it acts against micro-organisms.

Then, we will introduce two main methods of hydrogen peroxide distribution in the environment to be bio-decontaminated.

What is Decontamination?
It is the process of cleansing an object or substance to remove contaminants such as micro-organism or hazardous material, including chemicals, radioactive substances, and infectious disease.

It is defined as the destruction of micro-organism, except bacterial spores, on inanimate objects. 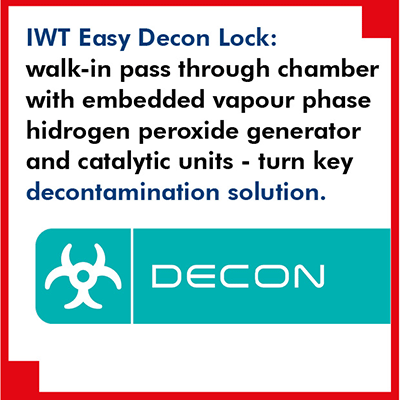 Sterilization refers to any process that removes, kills, or deactivates all forms of life (viruses, bacteria, fungi, spores, etc…) and other biological agents, like prions, present in a specific surface, object, or fluid, for example food or biological culture media.

Disinfection and Sterilization are forms of Decontamination.

It is the process of removing residues and soil from surfaces to the extent they are visually clean. Cleaning ensures that a disinfectant will work effectively and interact with the microbial cells.

It is a measure of how thoroughly a decontamination process reduces the concentration of a contaminant. A “log reduction” represents a 90% reduction in microbial population.

What is the D-Value?

It is the time required, at a given condition, to achieve a 1-log reduction, that is, to kill 90% of relevant micro-organisms.

A 6-log reduction is a common goal of bio-decontamination processes, which can be achieved through different methods:

However, this first episode will focus on hydrogen peroxide method. Hydrogen peroxide is a chemical compound, with formula H2O2, known also as “oxygenated water” and discovered in 1818 by the French chemist, Louis Jacques Thenard. In its pure form, it is a liquid, colorless solution slightly more viscous than water. It is always used as aqueous solution at different volumetric concentration.

Hydrogen peroxide is an unstable compound which naturally decomposes to form water and oxygen, according to the exothermic reaction:

Hydrogen peroxide has been shown to be efficient against a wide range of microorganisms including vegetative bacteria, viruses, mycobacteria, fungi, yeasts, and spores. The mechanism of action is related to the oxidizing power of hydrogen peroxide, according to the following reaction.

The effectiveness of hydrogen peroxide has been demonstrated, but not limited to, on the following microorganisms. 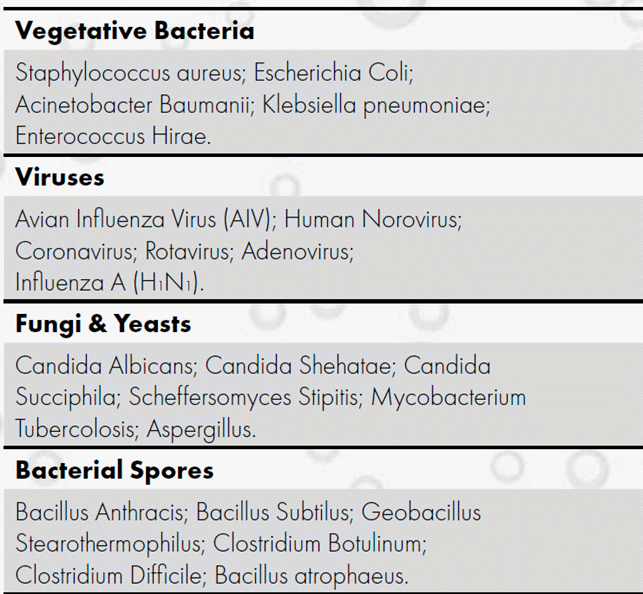 The efficacy of hydrogen peroxide against the coronavirus family, including the Sars-Cov-2 (Covid-19), has been shown in many studies.

The main difference between the two methods is the physical state of the hydrogen peroxide escaping from the generators. The VPHP produces a mixture of air and hydrogen peroxide vapour, which can be considered, with good approximation, a gaseous system, where the single molecules are not linked to the others.

On the other hand, AHP process produces a fine mist by hydrogen peroxide nebulization. The fog
created is composed by small droplets (up to 10μm), which are still in a liquid state.

If we compare the hydrogen peroxide molecule’s dimension (0.1nm) to the smallest feasible droplet’s size (10μm), we can observe a difference of five order of magnitude.

It means that if the vapor were a grain of sand, the aerosol would be a hot-air balloon.
Both methodologies start from an aqueous solution of hydrogen peroxide (30÷35% for VPHP and ≤8% for AHP) to create the airborne disinfectant that spreads into the environment to be decontaminated.

Vapour Phase Hydrogen Peroxide condenses onto the surfaces in a manner not visible to the naked eye.

The condensation is in the form of micro-droplets (few microns) with a high concentration of hydrogen peroxide, perhaps 60% or 70%. This phenomenon is called Micro-Condensed Hydrogen Peroxide (MCHP) and it is responsible for the very rapid sporicidal effect (6-log reduction achievable in few minutes). Therefore, the airborne disinfectant mixture, composed by water and H2O2 vapour, condense out according to the dynamic of the single components. MCHP happens because the hydrogen peroxide has a higher molecular weight than water, therefore H2O2 has a much lower vapour pressure than water. It means that Hydrogen Peroxide condenses out preferentially ahead of water vapour, which is inevitably present when an aqueous solution is used as the source. 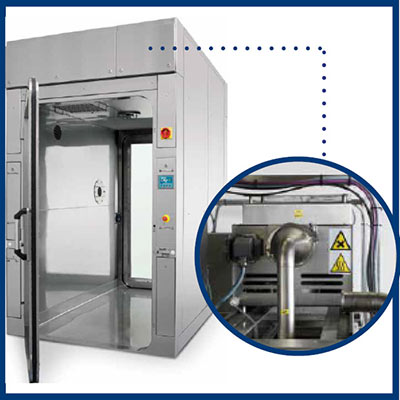 Nevertheless, Aerosolized Hydrogen Peroxide has a very rapid sporicidal effect too. Since the aerosol has a huge exchange surface, the evaporation of the small droplets is very fast (evaporation velocity is inversely proportional to the drop size).

No MCHP → No Rapid Sporicidal Effect