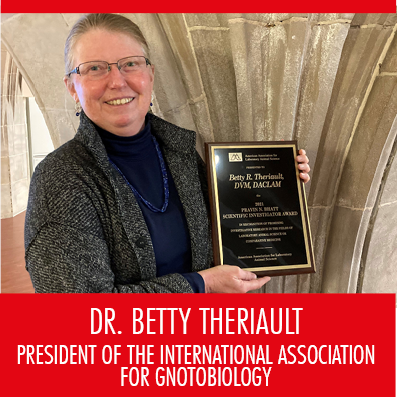 President of the International Association for Gnotobiology, Dr. Theriault has received an Award from the AALAS Board of Directors

Dr. Theriault has been nominated by the Committee on Laboratory Animal Training and Research (CLATR) for the Pravin N. Bhatt Scientific Investigator Award and to have the nomination endorsed by the AALAS Board of Directors.

The award was first created by AALAS in 1994 and in its current format is intended to recognize individuals who have made significant scientific contributions to laboratory animal or comparative medicine and have also contributed to the AALAS community through dissemination of their work in various formats such as local, regional and national meeting presentations, posters and publications, as well as mentoring of trainees or others in the laboratory animal or comparative medicine community. The recipient of the Bhatt award is also invited to present the Wallace P. Rowe lecture at the AALAS national meeting.

Dear Dr Theriault, firstly congrats! Can you tell us more about the award and your talk?

Thank you! It has been such an honor to have been nominated for the Pravin N. Bhatt Scientific Investigator Award. This invitation was quite humbling. Both Drs. Bhatt and Wallace were giants in virology, comparative medicine, and their contributions to the laboratory animal profession. While much of my participation at national AALAS meetings has been on gnotobiotic technology and facility operations, my scholarly activities have been in animal model design and development. 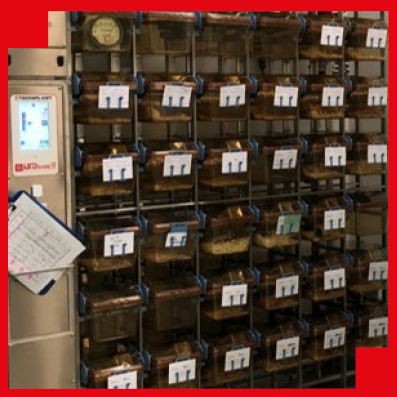 It was a great opportunity to share with the community several animal models we have been developing in recent years at The University of Chicago, scientific advances they support and the surgical preparations requiring fastidious attention to sterility and detail that these models demand for success.

You are managing a very complex facility! What have been the toughest difficulties in managing your facility during Covid lockdown?

Our facility has been very fortunate. As our researchers ramped down their work (rapidly), and we pivoted to asynchronous staffing teams, we were very well positioned to support our unit’s operations.

I think the strength of our team, their professionalism and their resolve enabled us to remain nimble on an ongoing basis. From the inception of the pandemic, we were classified as essential personnel due to the need to care for the animals we oversee.

Of course, as we were outlining color codes for the phases of operation we would enter, mainly driven by available staffing to support unit operations and animal care, there was so much uncertainty.  The high incidence of COVID-19 infection and deaths for Chicago in the Spring of 2020, coupled with the civil unrest we were experiencing in the United States and very tangibly in Chicago made every day seem like a high alert day. It was very intense. The animal care staff was just amazing! They were truly heros for their dedication and determination to care for the animals and protect our scientist’s research. The resolve to show up each day with so many personal and societal challenges cannot be overstated and go unrecognized.

What did you learn from this period and what do you suggest to your colleagues to consider for Guidelines for a Gnotobiotic facility?

So much was learned. As an AAALAC international accredited program, we already had an emergency response plan in place. A rapidly emerging global pandemic was not one of the emergencies specifically described!  We were in good shape however as relates to the needs of the animals, specifically food, water, bedding, health observations.

Our gnotobiotic facility is a “centrally” managed facility and program within our broader animal care program. This positioned us well with myself as a veterinarian and all of the staff classified as essential personnel. This afforded us the ability to retain access to manage critical functions which included the specialized care for the germ free and gnotobiotic animals. 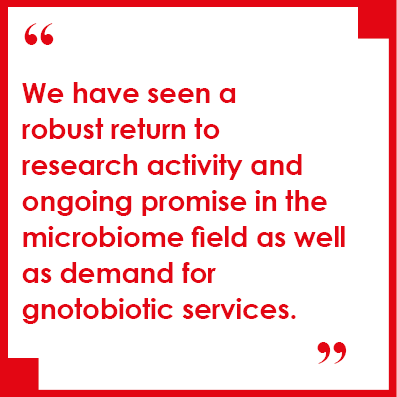 Managing communications, creating a stable and supportive at work and remote work environment for the staff and affording flexibility to meet facility and staff needs during a time of crisis was critical. We used many electronic support services available to us to achieve this. Having candid and realistic conversations with the researchers that we support also facilitated planned completion of ongoing experimental work, prioritizing plans for studies once new projects could be launched and maintaining colonies to be most favorably positioned when restrictions loosened was also of great value. I am also a strong advocate of cross-training and redundancy. These strategies also helped us greatly so we could operate successfully with the reduction in labor density.

What is your feeling about Gnotobiotic trends in the next years after Covid period?

I believe it will be robust. We have seen that correlations abound with respect to the influence of the microbiome on human (and other species) health and deviations from health and/or disease.  Although much active research was paused for several months, research activity was not.  Virtual meetings continued with exchange of information and new data.  Manuscripts were completed and published. Time to reflect and plan was used strategically and judiciously by the research community. We have seen a robust return to research activity and ongoing promise in the microbiome field as well as demand for gnotobiotic services.

Do you think we will see an acceleration of Science in gnotobiology?

Absolutely. There remains so much to be discovered. So much more understanding of biological systems can be elucidated, and so much potential for novel therapeutic interventions in the biomedical field.

The acceleration of science in gnotobiology was driven by new “omic” technologies 15-20 years ago. These technologies have become more accessible, less costly, and expertise in data analysis in the omic fields has markedly developed.

I anticipate demand for gnotobiotic technology and animal models will remain high. The future looks bright!