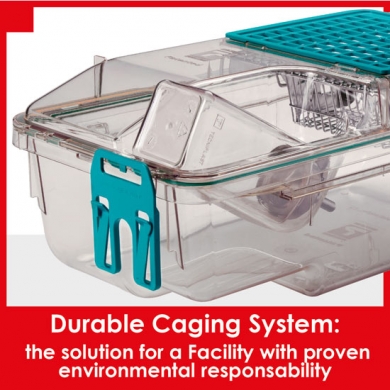 We're almost at the end of 2018 and, all through the year, one message has been heard loud and clear - single-use plastic is bad, bad, bad.

Ever since Blue Planet II aired over a year ago, we've been increasingly conscious of the vast islands of plastic floating in the ocean. Heart-breaking images of dying polar bears and whales with plastic spilling out of their stomachs have circulated on the internet, sparking a national debate. And no one wants to see animals harmed.

It wasn’t too long ago that many of us didn’t even think twice about this stuff. In the past we’d pick up a coffee in a limited-edition paper cup on our way into work, get a sandwich for lunch in plastic wrapping and, at the end of the day, pick up some last-minute shopping - carried home in a plastic bag.

Most disposable coffee cups have a hidden plastic lining which makes them particularly hard to recycle. For the moment, there are only a small number of specialist plants that are able to process them - which is why only one in 400 cups ends up actually being recycled.

And don't get us started on all the packaging we go through when shopping for Christmas... Then we’d just throw all that plastic away. Sometimes it would go in the recycling bin. Little did we know that not all of it would be recycled, instead getting dumped in landfills overseas.

But now we know the harm single-use plastics can do, many of us are looking for ways to use less of it - and now there’s new legislation limiting the use of Single Use Plastics so we’ve picked the brains of an eco–expert, here’s his summary and advice:

Interview with Dr Vito D’Incognito, a recognised leader in Sustainability

Dr D’Incognito, the European Parliament has recently published a Directive (COM 2018 340) on the use of plastic. Can you briefly describe it?

Despite more than forty years effort by the European Community, Standard Organizations, Green Stakeholders and so on, the culture of 4Rs (Reuse, Reduce, Recycle and Repair) does not seem enough to highlight the impact of littering and, consequently, the consumption attitude is provoking challenging environmental problems due to the waste packaging dispersion and territory littering.

Much research has been conducted to consider land contamination from dispersed packaging materials showing evidence of one of the worst features of the dispersed materials: i.e. the persistence for months and years in the environment. 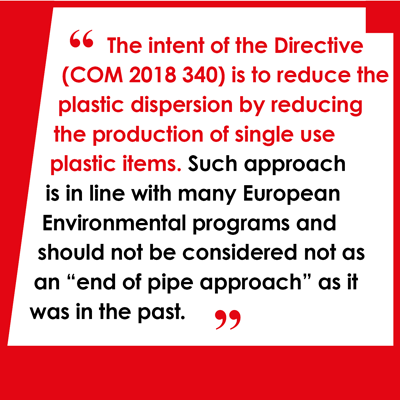 Due to the persistence characteristic of the plastics, the Pacific Ocean has today accumulated a very significant amount of plastics reaching an incredible dimension and the only degradation that has occurred is the partial splitting in minor plastic pieces.

One of the most terrifying  consequence is that tiny pieces and micro-plastics are ingested by the fish. Owing to the inorganic characteristic, the plastic ingested cannot be metabolized and remains in the tissues of the fish. When men eat the fish, they become contaminated by micro-plastics through the food chain creating new diseases and sicknesses for humans.

The intent of the Directive (COM 2018 340) is to reduce the plastic dispersion by reducing the production of single use plastic items. Such approach is in line with many European Environmental programs and should not be considered not as an “end of pipe approach” as it was in the past.

If we have understood well, the directive objective is the reduction of single use plastic products!

The Directive is based on the results of scientific research, for example a recent study showed that 90% of items washed up on European beaches is made of plastic goods and about 60% are items made of single use plastics!

Due to the actual situation it is important to interrupt the dispersion chain by avoiding and limiting the production of goods made of single use plastics.

The Directive of the European Parliament (COM 2018 340) moves towards a new approach and paradigm adopting limitation and restrictions in using disposable (single use) plastics, only when strictly necessary or with no viable substitutes (e.g. reusable plastics); (see annex to the Proposal Directive COM 2018 340). Another additional objective is to shift the use of single use plastic to reusable plastics, any time it may be possible, to substitute products with the same function but that could be used many times and so reduce the littering and wastes dispersion (as for example shift from Single Use Cage to Durable Cages).

As soon as we interrupt the production of single use plastic items, we will obtain other additional benefits as we reduce the resource depletion (fossil fuel resources) considering that for producing 1 kg of plastics goods we avoid processing about 1,4 kg of crude oil having about 4 MJ of energy that could be used for other purposes.  Also, the energy for producing single use plastic items will be saved, saving additional fossil fuel resources to produce electricity.

Do you see a specific product in the Lab Animal Science that will be affected by this directive? 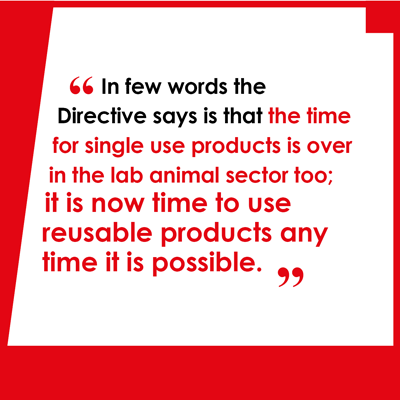 Laboratory Animal Science is a sector of research with specific needs that we can summarize as requiring best environmental and housing conditions for the animal care and welfare for reliable scientific results. The Proposal directive gives clearly 2 messages:

In few words the Directive says is that the time for single use products is over in the lab animal sector too; it is now time to use reusable products any time it is possible. And even though the Directive is European it should be considered also by other Countries and from organizations exporting in Europe. The new message or paradigm on the limitation of Single Use Plastics will very soon include products in the Lab Animal Science Arena.

Do you think that the Directive will be effective?

As with other environmental issues the role of the European Community is to focus the attention of the European citizens on key environmental matters and then influence their behaviors. The results are positive, but we don’t know the all the locations were plastic waste is littered into the environment. This may be in European Countries but may also be in other Continent Countries. The restriction and limitation in using single use plastics goods will be applicable not only to European producers but also to producers in other countries who will face the same limitation and restriction within European markets.

Do you know the difference between a Single Use Cage and a Reusable Cage in terms of CO2 footprint? 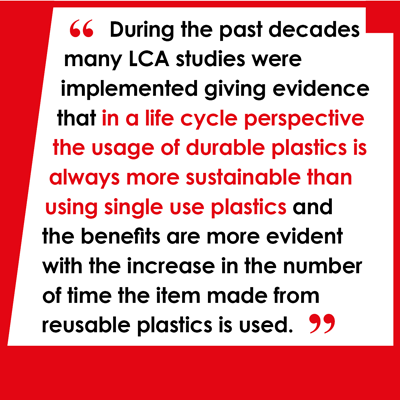 Going back to the Animal Science Laboratory I can confirm that there are research studies comparing reusable and disposable items in terms of Environmental impact and all the research is made on the base of Life Cycle Assessment methodology, considering that the LCA is the most appropriate scientific method used for assessing the sustainability of products.

Some example of effective research published are:

d. There are couple of very complete White Papers published by Tecniplast in November 2011 and in 2012 (contact Tecniplast in case of interest).

When an LCA study is implemented the environmental impacts are considered over a wide range of impact categories ranging from the Global Warming potential to acidification and human or natural toxicity.

Are you aware of any studies performed which support the Directive?

During the past decades many LCA studies were implemented giving evidence that in a life cycle perspective the usage of durable plastics is always more sustainable than using single use plastics and the benefits are more evident with the increase in the number of time the item made from reusable plastics is used.

All such studies could be considered good reference for the Environmental Policy of the European Community focused on developing the circular economy but also on reducing resource consumption in line with the Sustainability concepts.

Also, the world of Lab Animal Science is under new pressure due to tender requests to calculate Carbon Footprint or the full set of Environmental Impacts categories (LCA)* creating risks and new opportunities for the organizations working in such supply chain.

The Directive on disposable plastic moves in different directions: from the ban on the marketing of certain products to reduction targets for others, and as far as disincentive measures (such as charges and taxes) for others. Conclusion: it is hard time for the (disposable) Single Use Plastic items (such as single use cages) which will be soon under close evaluation by the European Community to reduce the plastic quantities used in Europe and by Users with the objective to reduce the Carbon Foot Print of their facilities.

And here’s our Christmas message:  Don't use loads of fancy wrapping paper

While wrapping paper looks pretty and can add an air of mystery to those presents under the tree, it's not so great for the environment. Wrapping paper often actually contains plastic pieces, and is laminated in plastic to give it that glossy look.

Plus, in order to wrap those presents, you need to use sticky tape - which is also made of plastic.

Because of this, many recycling plants won't take wrapping paper and, according to one study, about 108 million rolls get thrown away. Scary!